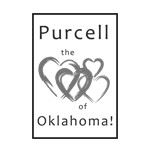 Create an Account - Increase your productivity, customize your experience, and engage in information you care about.

The City of Purcell is a Council-Manager Charter (PDF) form of government. The City Council consists of five elected members. A mayor and a vice mayor are selected by the Council from its members to preside at meetings, to sign Council approved documents and to singularly represent the Council at events. Council members also serve as Trustees of the Purcell Public Works Authority Trust (PPWA) that manages revenue operations of water, wastewater, electric and solid waste collection. PPWA also holds ownership of Purcell Municipal Hospital and the Purcell Golf Course.

Further, the members also perform the board of directors' duties for the Purcell Economic Development Authority.

Members are elected to serve three-year terms on the Council and Authority, rotating one or two members for election annually.

The City Council/PPWA appoints a professional City Manager/PPWA General Manager as the Chief Executive Officer to direct the operations of the organization. The City Council also appoints the City Treasurer, City Attorney and Municipal Judges.

Reporting to the City/Trust Treasurer are Customer Service and Accounts Payable.

The City of Purcell/PPWA has an annual budget of twenty million dollars plus Purcell Municipal Hospital an additional twenty million. One hundred staff and support associates are employed by the City/PPWA plus that many at the Hospital.