Create an Account - Increase your productivity, customize your experience, and engage in information you care about.

What was only a river crossing in the vast plains of North America little more than a century ago has now developed into the thriving Oklahoma community known as Purcell. Its first permanent residents were the Chickasaw whose life in the new territory centered around raising cattle, horses and hogs on land that before had been home primarily to buffalo and prairie dogs. Then came cattle drives, the railroad, and settlers that created the town that staged a prominent role in the early history of our state. Once called the Queen City of Indian Territory it is today trademarked as The Heart of Oklahoma. 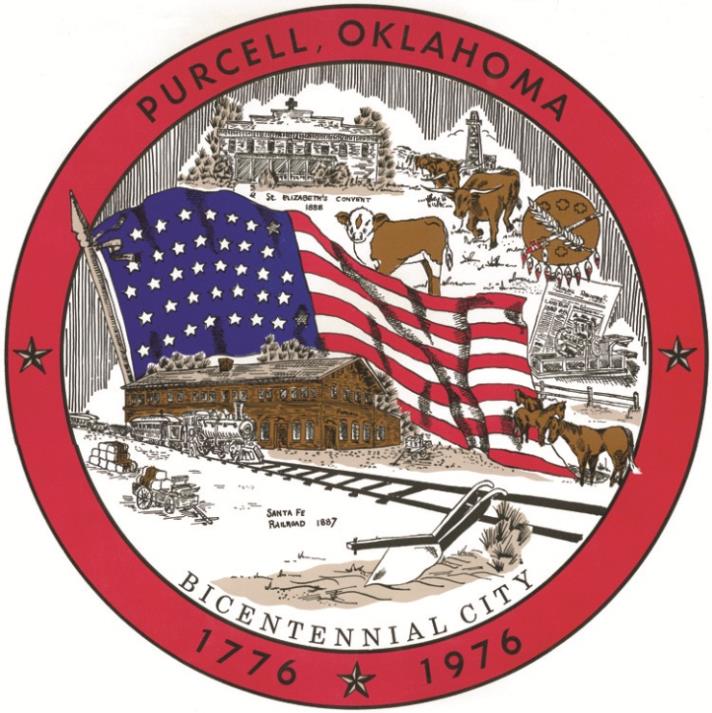 Purcell qualified as a United States Bicentennial City and applied for recognition August 28, 1975. Presidential designation was made October 23. The official flag, bearing the Bicentennial emblem, was presented at a citywide ceremony December 12, 1975.

In keeping with the nation's bicentennial celebration and as a reminder of the rich heritage of the community, the official seal for the city was designed. Its purpose is to mark the celebration of our nation's founding and 200 years of American freedom while at the same time setting Purcell uniquely apart from the rest of the country through this emblem of its heritage.

The symbols of the progress of this city, flowing out of the flag of 1887, represent the hardy pioneer spirit that made Purcell grow and prosper. It is the same brand of courage displayed by our nation's founders. The seal depicts the panorama of events that have contributed to our growth. It includes cattle and horse ranching, oil, agriculture, education, newspapers and the railroad.

The area was first settled by the Chickasaw Indians who moved here from Mississippi in search of a place where they could live by their own laws. An 1837 treaty with the Choctaws provided that the Chickasaws could share in the Choctaw Nation, although they remained under Choctaw government. This was not changed until 1855 when a new treaty granted the Chickasaws the right to their own form of government.

Though the land was under common ownership, the Chickasaw fenced off acres of open range and began raising stock. These were the earliest ranchers. During this time herds of 1,500 to 2,000 head of longhorn and other cattle breeds were driven northward to railroad stockyard cities in Kansas where beef prices were ten times those of the South. When the railroad extended its line south it marked the end of the back breaking, cattle-killing trail rides. Cattle from the area around Purcell were now bought here to be shipped to northern cattle markets.

The longhorns, so common when herds were driven up the Shawnee and Chisholm trails, are no longer present on the Oklahoma range. Thoroughbred equine stock have taken their place. Horses, once raised for transportation and work, are now bred for racing and pleasure. Purcell carries the prestigious regard as the "Quarter Horse Capital of the World".

Though given little emphasis in the early history of the area, oil was discovered locally that motivated Purcell businessmen to organize a drilling company. Today that industry is the livelihood of many prominent Purcell citizens.

Another influential factor in the growth of Purcell is agriculture. This industry is represented in the seal by the plow in the furrow and the cotton waiting at the station for shipment. Purcell was the second largest cotton market in the Chickasaw Nation.

Since its beginning, Purcell residents have been concerned with education. The first school for the area and the second in all of Indian Territory was Saint Elizabeth's Academy. Founded in 1888, it was an active educational institution for local students until 1968.

The Osage shield with crossed olive branch and peace pipe, taken from the Oklahoma state flag, is used in the seal to symbolize the marriage of Oklahoma and Indian Territories. The small crosses on the buckskin shield are said to be an American Indian's graphic sign for stars, indicating lofty ideals. No symbol could better represent the character of the founders of this city who were so instrumental in working to unite the two territories into the "Tomahawk State."

The history of the newspapers of Purcell is concurrent with the history of the territory. The Purcell Register first circulated November 23, 1887 as one of the first six to be published to what is now Oklahoma.

The coming of statehood carried more than usual significance in Purcell. The celebration on November 16, 1907 was inspired by recognition that the first statehood convention was held here. W. H. Walker, early territorial newspaper editor and proponent of the union of Oklahoma Territory and Indian Territory, called the meeting to order on September 30, 1893.

The train waiting at the station was chosen to depict the arrival of the Santa Fe Railroad to Indian Territory and the reason that the town was placed at this site. To keep up with the cattle shipments and the opening of "unassigned lands" in Oklahoma Territory the Southern Kansas Railroad built from the north and the Gulf, Colorado and Santa Fe construction from the south raced to be the first to reach the Purcell site.

At the same time, several enterprising citizens of the area located town sites within a mile or two of the present town. They knew that somewhere on the high ground just out of the Canadian River bottom a town would be built on the Chickasaw side. The final settlement was determined by the railroad's placement of their yards and depots.

Named for E. B. Purcell, an early director of the Santa Fe from Manhattan, Kansas, the town was needed as a shipping point. On the steep red hill behind the depot, tent stores rose to provide the settlement's needs. The rapid growth of the town must have been a surprise to its founders since its original "four blocks" grew almost overnight into the largest shipping point in all of Indian Territory.

The Santa Fe station house built in 1904 housed one of a chain of eating establishments founded by Fred Harvey. Along with Brown's Opera House, it was the center of social activity for a wide area. Many Purcell residents would remember the delicious food and splendid service at the Harvey House which required "gentlemen" to always wear coats. With the coming of dining cars and faster through trains, it closed its doors and the town's social life moved away from the depot to the top of the hill where new restaurants were thriving.

The South Canadian River has long been a problem in travel to the west in rainy seasons when its channel would quickly swell from its banks. When it was calm it could be forded. Wagon trains relied on "river pilots". These were the mule teams which pulled people and their wagons across.

Each wagon closely followed the tracks of the wagon wheels that had crossed before them. Slight veering to either side might mean quicksand and woe to the teams that could be caught in those sinking, treacherous pockets.

"Hooker Bridge" was the first toll bridge built across the river and was built completely of wood. Construction was completed September 29, 1899. When its span was washed away in October 1904 the people had to go back to fording the river. Another bridge was built in 1911 and it was announced that at 3,400 feet it was the longest elevated highway from Chicago to the Gulf.

Now Eastern motorists going to Houston could finally cross the treacherous South Canadian. However, this bridge proved to be insufficient to handle the automobile traffic which U.S. 77 poured across it. The present James C. Nance Memorial Bridge (named after the newspaper publisher and former Oklahoma State Speaker of House and President Pro Temp of the Senate) was erected in 1937. Transportation has played a key role in the growth and development of the city from the earliest river crossing days, to the time when the railroad was in its heyday, and up to the current vast interstate highway system linking North and South, East and West.

Known as the largest and finest town in the Chickasaw Nation, no city in Indian Territory had brighter prospects nor a more ambitious population.

The first convention to advocate single statehood for Oklahoma was gathered September, 30, 1893 in the former Trinity Methodist Episcopal Church, South of Purcell. It was called to order by William H. Walker, editor of the Purcell Register newspaper. Resolutions passed by the group favored single statehood, instead of dual Indian Territory and Oklahoma Territory. It wasn't until 14 years later that statehood was realized. A model of the church is located in the McClain County Museum.

The occasion was approved as a "Historical Event and Site" by the Oklahoma Historical Society in 1990. The McClain County Historical Society celebrated the event on Statehood Day in 1991 when a rose granite marker was placed at the corner of Second and Washington Streets in Purcell on the Courthouse lawn.

On November 1907 the school children of Purcell marched to Main Street and Second Avenue where they formed a large star in the center of the intersection. This highlighted the day when Oklahoma became the 46th state in the union. A patriotic program with proper speech-making followed. In 1995, the ceremony was duplicated by the children of the Purcell area. A memorial plaque at Santa Fe Square was also dedicated to commemorate the event.